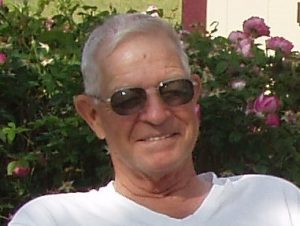 Franklin Delano Fox was born December 11, 1934, to Bert Earl Fox and his wife Margaret Josephine Degnan in Sitka, Cimarron Twp, Clark Co Kansas. He passed March 10, 2022 VA CLC Amarillo TX. He was a brother to: Ida McCloskey Marian Legg, Maxine Pendergast and Vera Heiland His Children are: Curtis, Margaret, Darrin Fox and Art Smith and Ranee Smith Gokie. He married Linda B. Fox August 29, 1977. Franklin was in the US Army serving 18 months from 1955-1956, stationed in Germany with several months in hospitals in Germany and Colorado. Frank was a master of all trades, always enjoying mechanic work from early childhood till his forced retirement. He was particularly proud of working communication towers; becoming a “Master Mechanic” with Evinrude Motors after having been told that an auto mechanic could never be a good boat motor mechanic; and hauling Greyhound racing dogs, including a “Million” winner. Franklin was an inventor; coming out of the service with a handicap, he had to learn to adapt to any job he performed or make the tool he needed.  He always improved on manufactured items. He never bothered to get a patent, just enjoying the challenge. He was also a licensed locksmith. He enjoyed showing his toy poodle Mandy as a puppy in the AKCA dog show and drag racing. He owned more cool cars, pickups and motorcycles than most people dream about. He loved airplanes and flew a lot with local pilots, but never got his license. He enjoyed hunting and fishing and was a Benefactor Life Membership of the National Rifle Association and member of their Golden Eagles Club. Frank’s values and love of his country are shown in his military background, in his service for over twenty years as Oklahoma Republican State Committeeman, Life Member of VFW Post 1714 in Dodge City and former member Loyal Order of Moose. Frank enjoyed ranch life in his youth and again since 1989, when he and Linda moved to her great-grandfather’s homestead near Arnett, OK. He entered VA long term care in March of 2020. His remains will be returned to Ashland, KS. Brief graveside service Ashland Cemetery is planned for Wednesday April 6th 1:30 pm – weather permitting.